Badin High School is named in honor of Father Stephen T. Badin, the first priest ordained in the United States, a pioneer missionary in Ohio, Kentucky, Indiana, Michigan, Tennessee, and a former pastor of St. Mary Church in Hamilton. Father Stephen Badin, in the period between the Revolution and the Civil War, was one of the great Catholic missionaries on the American frontier. He might justly be called the “Johnny Appleseed” of Catholicism in the Ohio Valley. The biography of his life, in his early years at least, is a history of the Catholic Church in the Old West. Founding churches, establishing schools and preaching the Gospel, Badin, with rare courage, forged the Catholic Church on the frontier of the United States. This illustrious figure is identified with the history of the city of Hamilton, Ohio. He came to Hamilton on two occasions; once on one of his missionary journeys, and once in 1850 to take up duties as the pastor of a local parish, St. Mary Church on Front Street. 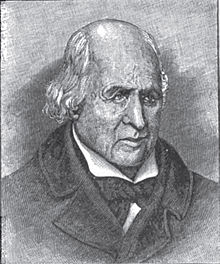 Stephen Badin was born in France in 1768, and he died in Cincinnati on April 19, 1853. As a young priest he went to Kentucky in 1793 and labored there until 1819. He was often the only priest in the wilderness of Kentucky. Later he traveled to Europe and for ten years begged for the missions in France, Italy and England. It was during this time that he was a great financial help to Bishop Fenwick, the first Bishop of Cincinnati. Bishop Fenwick directed him to take charge of the Potawatomi Indians of northern Ohio and southern Michigan. There he labored with great success. After this he wrote articles for the Catholic Telegraph of Cincinnati. Around this time he donated a farm in northern Indiana which became the site of the present University of Notre Dame. Father Badin spent the last years of his life with Archbishop Purcell of Cincinnati at the old Episcopal residence on Plum Street. His body was laid to rest in the cathedral crypt in Cincinnati where it remained for over fifty years. In 1904, Archbishop Elder permitted the body of Father Badin to be transferred and buried at the University of Notre Dame in a small log cabin chapel which had been reconstructed as a replica of the chapel that Father Badin erected on that property almost eighty years before.